Hello I am new to this group. I would like to know where I can download MyRobotLab.apk.

I've uploaded the latest to http://code.google.com/p/myrobotlab/downloads/list
Although I have not had the opportunity to test with any actual hardware for a while.
The Arduino service requires a specific sketch to run on the Arduino hardware - This is a link to the sketch http://code.google.com/p/myrobotlab/source/browse/trunk/src/resource/Arduino/MRLComm.ino

Thank you very much.

Hello ! Is there still a way

Is there still a way to download MRB for android ?

It's not important, i was the curious

Hi Beetlejuice, The apk was

The apk was removed because it was difficult to maintain the changes as MRL become more advanced. They had seperate code primarily because of the GUI.  MRL's old GUI is Swing  - which is not Android compatible.  Once the WebGUI become sufficiently usable, I'll repost a Android version which will be in synch with the rest of MRL all the time.

Awesome work guys.  Do you have any kind of rough idea when android bits may work again, and which services will or won't work?

Well it depends what you mean by "work" :)

There is already parts of the new webgui working on Android.  At least any Android compatible browser which supports websockets.

Thanks for answering so quickly.

Maybe I'm being dumb, it happens often enough!  To clarify what I meant:

I found an old copy of MRL.apk (myrobotlab.1695.20130913.0508.zip) and installed it, but it crashed on startup with "Unfortunately MyRobotlab has stopped working." without showing any screen, this was on my Galaxy Tab 10.1 with a Jelly Bean ROM (4.2.2).  Looking at one of your previous comments it looked like it was being decommissioned until the bugs in webgui had been ironed out.

What I'm trying to do is run a version of MRL on Android, that can run by itself without a computer.   I'm instersted in the following services:

a websocket server and http server would be awesome too, so I can make some kind front end using a remote web browser???

Enormous thanks in advance for your time Grog.

Heh, no your not being dumb

Heh, no your not being dumb .. it was a trick question :)

When some people want something to "run" on their phone they are only interested in the gui part .. and this work now for Android in that the webgui (browser end) runs on any phone - but the "real" part of MRL runs on only a raspi or regular pc at the moment.

It used to run on Android but was integrated with Android's own graphics display, but that caused lots of gaps between the Swing GUI and Android.

Now we are working ont the webgui which allows access from any device (Android, Tablet, IOS, PC, etc) - but its very developmental ...

I could compile another apk - but the only access you would have would be through the webgui .. and since I dont know what you are doing its hard to say if the present state would accomidate what you need.

Do you have a specific hardware setup, or robot your trying to work with.. is it similar to a cellbot?

Mabye with more info about your project I can give you a better recommondation...

The robots are coming!!!

What I'm trying to achieve is using an Android phone as the brains / heart of internet enabled robots.  I want to utilise the affordable hardware to create a robots/drones for people that has minimal cost and complications.  I will make both land-based and flying toys.

Yes, similar to a cellbot, but I want people to be able to easily create their own front-end and be able to edit the higher level logic.

I have been working on my own project in Java, and am close to finishing, but thought maybe your system has some advantages on the backend.  I wish I had learned about your excellent framework when I started, and maybe could have put all my efforts into helping you.  As it is, I've come too far to not finish this project (nealry 4 years work and counting).

I have created a really simple way for people to customise their robots.  I've adapted Google's Blockly so that all coding can be done using a minimal number of blocks.  Maybe some time in the future I could help by adding some of my work to your project.

The attached picture shows all of the coding needed for a drone. All comms and hardware setup is done in the gui and needs no coding.

The front end is built in much the same way and generates HTML.

I look forward to hearing from you.

I'm excited about seeing drones and bots controlled by your system !

And I totally agree .. smartphone hardware is the bee'sknees for cheap yet powerful robots - (it's small, low power consumption, integrated gps, camera, accelerometer, and other sensors make it a shoe in - that plus consumer demand has made them crazy inexpensive)

Your Block design looks great, I too had thought of adding a Block service for programming...  but at the time I was considering OpenBlocks .. I guess the grandpappy of Blocky...  I still would like to do it, there are just a lot of things further up in priority on the list.

When I made MRL's first gui I was inspired by MatLab's graphical programming.  I had never used MatLab but saw some cool pictures in a glossy brochure ;)

You can program MRL using its graph - mostly its creating, deleting, or changing message routes for data flow 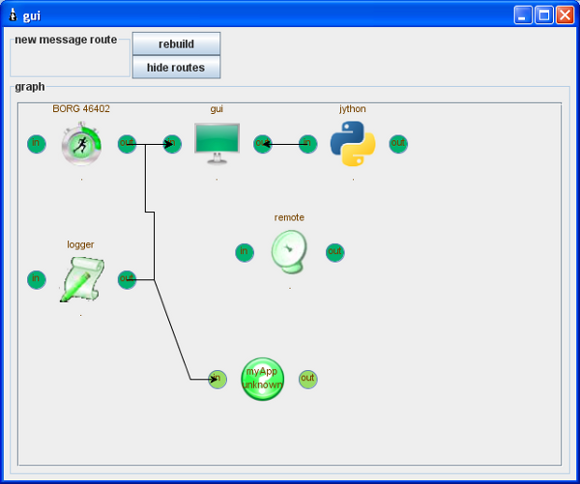 Some people still use it, and it has on occasion been usefull to get a map or diagnose a couple issues.  But most people quickly move on to programming with Python.  Python in MRL is just another service, in that, there is another scripting service and several more on the close horizon of being incorporated into MRL - (the rhino Javascript engine Service is next)

So, MRL's architecture is based on these Services and we continually Borg in other projects to allow us to play with more Blocks !!! :D

I would be very excited about Borg'ing your project with your guidance if you are interested, and in turn, your project would have easy access to all the other Services in MRL (OpenCV, Sphinx, Speech, etc... as you mentioned)

Also, I completely understand about wanting to complete your project.. maybe you can utilize MRL from it in some way....

I have used python to test the Adafruit  BBB Python modules (linux shared objects .so) for GPIO and successfully switch LEDs on and off . (note need to run as root or sudo due to permissions under default ubuntu user.

Now I want to test this from MRL but cannot get the Adafruit_BBB.GPIO to import.

This is MRL code I have written to test it out

It fails on line 5 with

Can any one suggest a way forward. I have searched the www and there is not a lot of info on trying something like this.

I'm not a coder, so would rather integrate existing modules ;-)

here is the link to Adafruit's BBIO modules

A quick suggestion - copy and paste what you have here in a new Blog post.

search for "create content" --- then create blog - they paste what you have, Your posting to an older post which is great but not really relevant for what you are trying to do.

Your post will go to the front page too - and get more attention from people who have more experience.  For example Alessandruino I think has done successful imports of python into the Jython service.

It's great you got MRL running on BBB - would like to see screenshots too if you have them !